The Innovation Award Goes To Cryocan 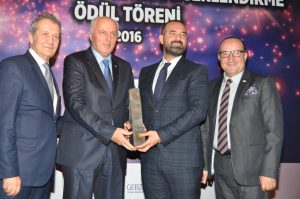 “Cryocan was granted the grand award of the year”

“There is much progress to be made”

“We have received the top 100 fastest growing awards in the battle that Tepav gave me, and this year one of the prizes awarded by a serious jury in the lead of the KSO and with PWC consultancy has further flourished,” Urhan said. We have a lot of roads to go for more success, “he said.

CRYOCAN, been awarded the grand prize at the cermoney, is producing three different facilities in Gebze: Fuel and LPG trailers and storage facilities. The chairman of Cryocan who is awarded with all due care for Productivity, Employment, Innovation and Branding, Financial Consequences, Foreign Trade, Collective Contribution and Environment, Employee Development and Awareness, stated that the growth rate in 2015 was 70% and it would be at the rate of 65% by 2016. Urhan in his rhetoric speech also stated that all the industrialists should head towards export to keep happening without stopping and focus on the search for new markets instead of mentioning crisis, and added  that they should not miss cash flow and finance in the meantime. . Urhan said that these and similar awards are always a source of inspiration. ” Last year as the result of the investigations conducted by Tepav we received the award of the first 100 fastest growing companies.” This award was given to us led by KSO and calling in by PWC by all significant jury  members which stimulated us much more. To provide continious to success there is much progress to be made”,he said.